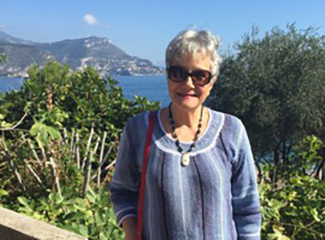 1950s - Interpreter-translator in English, Italian and French with the South African Legation; the Australian Legation; and with the office of the Director General of the Food and Agriculture Organization of the UN, in Rome.

January 21st 2003 at the Midem in Cannes, France, presenting the CD recorded in Chicago "EMOTIONS" (TCB the Montreux Jazz Label).

March 2005 - Godmother, Singer and Mistress of Ceremonies at the First "Jazz Ladies' Festival" in Lucca, Tuscany, Italy. On that occasion announces her retirement from all musical activities.

In October 1967 she represents Italy at the Warsaw Jazz Jamboree attending the creation of the European Jazz Federation where she is elected vice-president of the Division of Education.

During the 70s/80s she represents RAI at the yearly EBU (European Broadcasting Union) International Jazz Quiz, broadcast live by all member countries. She translates simultaneously from English or French into Italian.

During the 80s/90s she produces and presents all over Italy a series of successful International Jazz Concert Seasons.

She is requested by the educational authorities to hold high-school lectures on the history of Afro-American Music with live jazz music, all over Italy.

In 1983 she creates with Dizzy the "Dizzy Gillespie Popular School of Music" in Bassano del Grappa, Italy. In 1987, celebrating Gillespie's 70th birthday, the school inaugurates a section dedicated to blind students. It closes its activities in 1996, 3 years after Dizzy's passing away.

She has translated into Italian Gillespie's autobiography, To be or not to Bop, as well as various Duke Ellington writings.