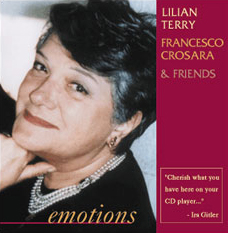 TCB (2000), with Francesco Crosara, Von Freeman and other US, Brazilian, and Egyptian musicians. Recorded in Chicago. "Night in Tunisia" is sung in Egyptian.

Cherish what you have here in your CD player, a rara avis, a real jazz singer who understands it only as one who has lived inside it can. 17 years after her Soul Note record with Dizzy Gillespie, here comes la Terry and she not only hasn't lost what she had but brings a new bouquet of obvious and intangible positives to the microphone. And she gets to demonstrate them backed by her talented son, Francesco Crosara, and his marvelous cast of emphatic musicians. 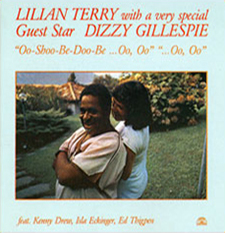 This album is not for those who like their jazz intellectual, inscrutable or introspective. This is fun jazz - the kind of happy jazz that tends to result when you assemble a small group of like-minded musicians who love to jam on the good old good ones and whose love of the music is as deep and enduring as the affection and respect they feel for each other. This is a record of a long-standing musical romance with two dedicated jazz devotees playing and singing in tribute to one another, and enjoying every moment of it. 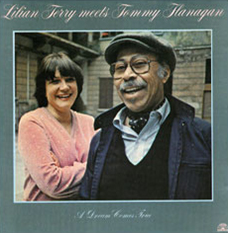 Soul Note (1982), with Tommy Flanagan, Ed Thigpen, Jesper Lundgard. Recorded in Milan. Tommy Flanagan was the only pianist who could lure me back to a recording studio, after a silence of well over 10 years.

Lilian Terry sounds the most American of the handful of European singers who have made it in jazz, yet she has the most international background of them all. Born in Cairo (her father was British, her mother Italian) Lilian left North Africa at 17 and, since then has lived in Italy where she became a fashion model, sold English cars and was a trilingual translator for FAO of the UN.

Her interest in jazz was serious but she did not consider a singing career until she made an album in 1959, for RCA, with Romano Mussolini and a group of Italian jazz stars. This led to engagements across the entire European continent where she was often the only European singer invited to participate, sharing the stage with such stars as Ella Fitzgerald, Anita O’Day, Nina Simone and Mahalia Jackson.

Soon she was contributing to articles in European jazz magazines and began a series of jazz programs for RAI, the Italian broadcasting network. Today she is a free lance director-producer, with both radio and television shows in which she often doubles as compère.

In Warsaw in 1966 she was one of the founding members of the European Jazz Federation. She turned to jazz education, a field where she pioneers in Italy, producing jazz projects for high schools and evening classes for adults, with appearance of leading US musicians. Lilian Terry’s associations with American musicians have gone well beyond performing with them in Europe (including such unexpected pairings as with Errol Garner and Charles Mingus). She has been a frequent visitor as broadcaster and journalist.

Her choice of Tommy Flanagan was inspired, for he is not only a superb soloist, but his classical performances with Ella Fitzgerald have established him as the finest collaborator any singer could hope for. And it says a great deal about Lilian that Tommy would not appear with just an ordinarily good singer. 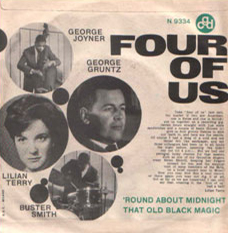 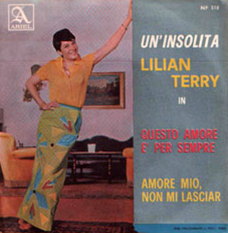 "Questo amore per sempre" and "Amore mio non mi lasciare"
Singing Bacharach, in Italian, in order to be allowed to record also some jazz... 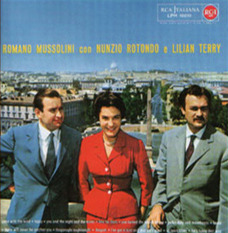